As part of SAFMORIL, we offer an online tutorial for XFST-based morphology development at CSC Notebooks. The tutorial is implemented as python notebooks which use HFST python interface. At the moment, access requires a HAKA account. If you do not have a HAKA account, you can contact SAFMORIL Helpdesk to arrange for local accounts or request a visitor account directly from CSC service desk. You also need a join code that you can request from SAFMORIL Helpdesk.

The tutorial is based largely on the course ”Computational Morphology” held at the University of Helsinki spring 2018. The course was taught and planned by Mathias Creutz. Senka Drobac also contributed to the exercises. The tutorial uses the same examples and exercises, but HFST command line tools have been replaced with HFST Python interface.

The tutorial is divided into seven parts, corresponding to the original lectures 1–3 and 5–8. 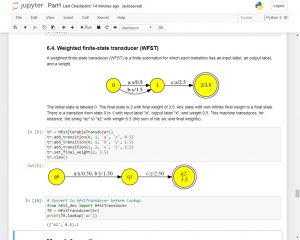